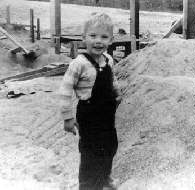 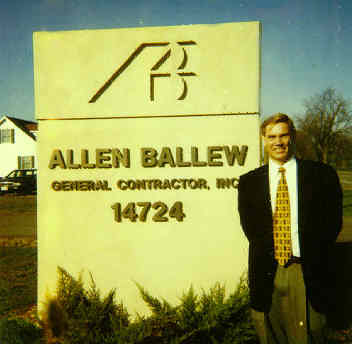 I had two great mentors in my career. The first was my dad, George Patton Ballew. From a very early age he began teaching me about construction. He was a carpenter by trade, and over time he worked his way up to Project Superintendent. The photo to the left is me at age three on one of my dad’s school projects in Georgia. No, I was not working then; I was playing in the sand pile. While living in Calhoun, GA. I would walk from school to my dad’s construction site on the way home. I was 9 years old and I remember my dad teaching me about reading plans. During summer breaks in high school I worked for my dad on his projects.

My second mentor was Mr. George E. Jensen, owner of George E. Jensen Contractors, Inc. It was on his projects that I worked during high school. Mr. Jensen had taken notice of me during those formative years and at the age of 21, he gave me my first supervision job. This was the start of my mentorship in government contracting under Mr. Jensen. That first project was a half million dollar renovation project of Building 15 at the US Public Health Service Hospital in Carville, LA.  After several years and numerous projects, I was promoted and worked in the company’s home office in Mobile, AL. I will always be grateful for Mr. Jensen’s mentoring and the trust he placed in me.

In 1982 I took a position with Dycon Construction, as a Contract Administrator on the GCEP Uranium Enrichment Facility in Piketon, OH. At the Piketon, OH facility I was charged the contract administration of  approximately 30 million in contracts with the government and administration of subcontractors.

ALLEN BALLEW General Contractor, Inc. was formed in 1984. We are a small family owned business that is dedicated to providing our clients with reasonably priced, high quality workmanship. Our original focus has been remodeling and restoration projects for with the US government. Over time we began including public works projects for state and local governments. The successful completion of more than 250 construction projects in over 14 different states demonstrates our extensive experience.

We would appreciate the opportunity to assist you with your project regardless of size. We have built everything from car ports to airports.